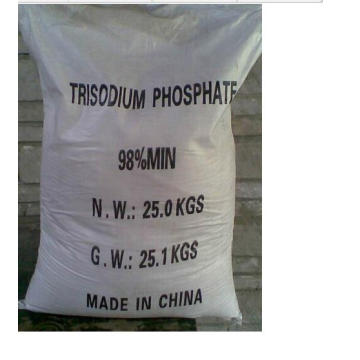 Trisodium Phosphate(TSP, E339) is a cleaning agent, Food Additive, stain remover and degreaser. Sodium phosphate tribasic is a white, granular or crystalline solid, highly soluble in water producing an alkaline solution. The item of commerce is often partially hydrated and may range from Anhydrous Trisodium Phosphate, Na3PO4, to the Trisodium Phosphate dodecahydrate, Na3PO4·12H2O. Most often found in white powder form, it can also be called trisodium orthophosphate or just plain sodium phosphate. Trisodium Phosphate was at one time extensively used in formulations for a wide variety of consumer grade soaps and detergents, but ecological problems have largely ended that practice, at least in the western world. Substitutes are not as effective, but the raw chemical can be bought in bulk to add to underpowered detergents.

The major use for Trisodium Phosphate is in cleaning agents. The pH of a 1% solution is 12, and the Trisodium Phosphate solution is sufficiently alkaline to saponify grease and oils. In combination with surfactants, Trisodium Phosphate is an excellent agent for cleaning everything from laundry to concrete driveways. This versatility and low manufacturing price, made TSP the preferred basis for a plethora of cleaning products sold in the mid-20th century. TSP Trosodium phosphate is still sold, and used, as a cleaning agent, but during the late 1960s in the United States,government regulators in seventeen states determined that overuse led to a series of ecological problems.
By the end of the 20th century, many products that formerly contained sodium phosphate tribasic were manufactured with TSP Substitutes, which consist mainly of sodium carbonate along with various admixtures of nonionic surfactants and a limited percentage of sodium Phosphates.

Tsodium phosphate is commonly used after cleaning with mineral spirits in order to remove hydrocarbon residues. Sodium phosphate tribasic may be used with household chlorine bleach in the same solution without hazardous reactions.This mixture is particularly good for removing mildew.
Although it is still the active ingredient in some toilet bowl cleaning tablets, TSP is generally not good for cleaning bathrooms, because it can stain metal and can damage grout

In the United States, Trisodium Phosphate is an approved flux for use in hard soldering joints in medical grade copper plumbing. The flux is applied as a concentrated water solution and dissolves copper oxides at the temperature used in copper brazing. Residues are fully water soluble and can be rinsed out of plumbing before it is put in service.
TSP Trisodium Phosphate is used as an ingredient in fluxes designed to deoxygenate nonferrous metals for casting.
TSP sodium phosphate tribasic can be used in ceramic production to lower the flow point of glazes

Trisodium Phosphate is still in common use for the cleaning, degreasing and deglossing of walls prior to painting. TSP breaks the gloss of oil based paints and opens the pores of latex based paint providing a surface better suited for the adhesion of the subsequent layer of paint.

Trisodium Phosphate is approved as a food additive in the EU and other countries. It has the E number E339 and is used as an acidity regulator in a variety of food products.

TSP has gained a following as a nutritional supplement that can improve certain parameters of exercise performance. The basis of this belief is the fact that phosphate is required for the energy-producing Krebs cycle central to aerobic metabolism. Phosphates are available from a number of other sources that are much milder than TSP. While Trisodium Phosphate is not toxic per se, it is severely irritating to gastric mucosa unless used as part of a buffered solution. Studies have shown that loading with Trisodium Phosphate may increase an athlete's VO2 Max as well as reducing the accumulation of Lactic Acid in the muscles.Dosing is typically 3-4 grammes per day for three days prior to competition.


TSP/Trisodium Phosphate Packaging: 25kg/bag or according to client request

Gemhold (SJZ) Trading Co., Ltd. is a fully integrated chemical manufacturer and supplier. We specialize in the production and export of chemicals which are used for a wide range of applications in the feed, fertilizer, food, industrial and water treatment fields. Our commitment to regulatory compliance and extensive product/supply qualification process give our customer.

We have advanced production equipment and technology, perfect testing methods and quality assurance system, the products sold hot throughout the provinces, and mainly exports to Europe and Southeast Asia and other countries.

"Control the quality by controling each step well, Improve the service by serving every customer well" is our long term presistence and commitment. We not only supply all the related lead products, but also with the best price, advanced technical and best service to get your trust.

We sincerely hope to cooperate with you, to build a good relationship of common develpoment and prosperity.